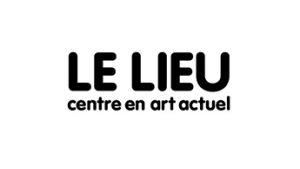 Le Lieu has been active in Quebec City since 1982, where it carries out both local activities and others abroad or with international partners. The centre’s interdisciplinary nature brings together installation, performance, manoeuvres, sound art, sound poetry, video and other explorations of the new frontiers of artistic expression. Le Lieu has always included in its programming on-site and off-site activities and activities close to what today are referred to as interdisciplinary practices, manoeuvres or relational aesthetics. In a spirit of exchange and in order to get around the thorny question of documenting ephemeral practices, Le Lieu develops ways of bringing different generations of artists into direct contact with each other in order to promote the transfer of knowledge, both on a local and on an international scale. On of the leitmotifs of Le Lieu remains the concept of networking. The centre has brought this concept up to date by bringing together, through events, publications and participation in international activities, various interlocutors, publishers, centres and communities in so-called peripheral (with respect to the major centres of official art) towns and regions. Since 1988, the Inter/Éditeur imprint has produced publications and audio documents of various sorts. This is confirmation of the self-management orientation of the centre’s realities and evolution since its beginnings. Inter/Éditeur has published thirty-five titles, most of them concerned with the processes involved in living art, action art and performance art. Many of these documents have to do with the Rencontre internationale d’art performance and with exchanges with other cities. The major publication Art Action 1958-1998 provides a historical overview of action art around the world and is an essential source of information, in both French and English. Through its publications, Inter/Éditeur bears witness to the contribution of artistic ideas and practices and to their context.