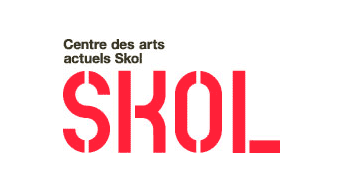 Skol’s mandate is to present the work of artists and theorists in the early stages of their careers, particularly those whose work is accompanied by critical thinking. Its goal is to privilege the promising practices of the future; to establish the conditions for facilitating the involvement of artists by creating a participatory space which contributes to the centre’s visibility; and to give greater space to spontaneous initiatives and to partnerships in order to better respond to the community’s needs. Skol’s development and its programming reflect the trends which emerge from projects received in response to our calls for submissions and from collaborations we initiate on the basis of an affinity of outlook.

By creating spaces for dialogue we seek to create connections between individuals and to valorize and share knowledge, experiences and skills developed for the visual arts milieu and adapted to its specificity. For each exhibition, the artist is invited to participate actively in educational visits geared both to students and the general public. Interactivity and openness to new practices, including those which overlap practices in other fields, force us to reconsider the traditional means of disseminating art.

Theoretical activities (public talks, print and electronic publications) reflect the critical dimension of our programming and highlight its ties to social currents and art history at the same time as it situates it in the field of contemporary practice.